Walk of Fame
by Rob Tieben

Moving through space in a performative way.
Design study during PlayFit project by Rob Tieben. Programming by Jeroen Hoogers. 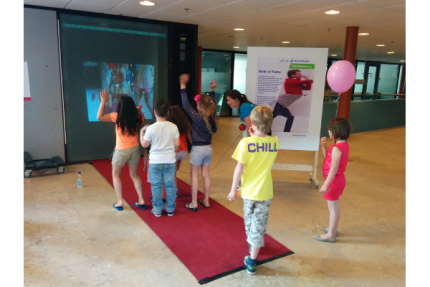 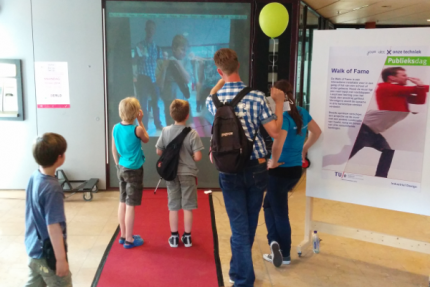 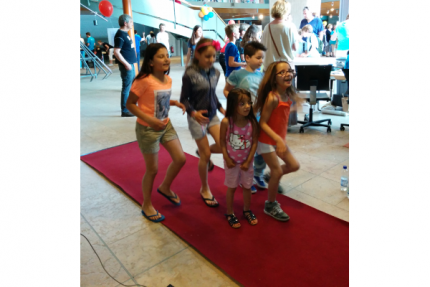 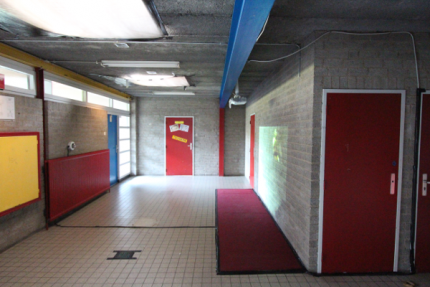 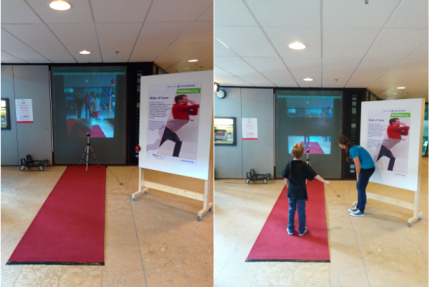 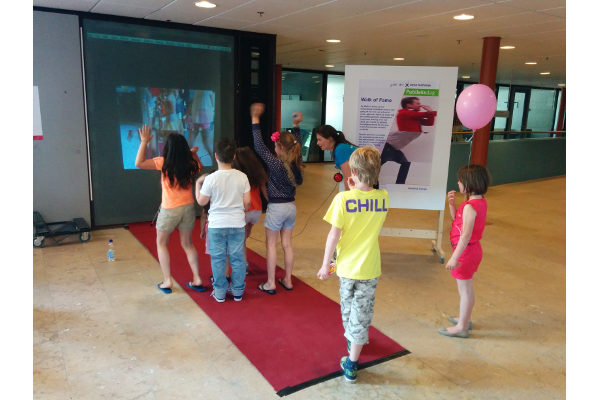 Walk of Fame is a playful installation which frames moving through space in a performative way. By moving through the camera’s view, the image of a player is recut on top of another recording, creating an unexpected and ludicrous video composition. This novel outcome stimulates players to move their bodies in different ways to create new configurations. The installation is public, so the act of playing and the resulting recordings are visible for others to see, which adds a social and performative quality to the experience. This allows the players to use the installation for the thrill of performing and as a means of communication.

Walk of Fame has been evaluated with more than thousand users at events, high schools and other public spaces. Teenagers were motivated to start playing in an (inherently) active way, while enjoying themselves in a creative and social way. Creativity, pleasure and social interaction were enhanced while sedentary activity was reduced – a good solution to fight the inactivity problem while providing a creative and autonomous moment.

This installation was designed by Rob Tieben as part of the PlayFit project; code development by Jeroen Hoogers as part of his internship.

A corridor in a regular high school in the Netherlands: you see a red carpet, and curiously walk over it. Seconds later, you see your head projected on the wall, with the body of someone else, and the legs of yet another person. You turn around, and walk over the carpet once more, but backwards – now, your legs appear, creating a jolly figure on the wall.

Our fascination in the design of the Walk of Fame was to let players motivate themselves and others to play through their own actions. We wanted to design for truly free play that was driven by the creativity and actions of the players.For this, we designed an installation that invited passers-by to play with the reflection of their own body. Through many design explorations with hundreds of players, we eventually designed and implemented the Walk of Fame installation, in Max/MSP and later in OpenFrameworks. This minimalistic installation captured a person walking over the red carpet, and recut one half of the player’s body on top of the previous player’s body. The installation design (only) focussed on the core activity of walking in a funny way. As such, the players were almost forced to come up with their own rules, goals and way of playing. This resulted in various types of free play, that strongly embodied our free play design vision.

Our challenge in the evaluation of the Walk of Fame was that we required in-depth insights in the how and why of the natural play process, actions and interactions. To do this as unobtrusively as possible, we selected and followed a group of teenagers. Most of these teenagers became ambassadors or emergent champions, taking a leading role in the playful and social interactions during the four-week evaluation. By interviewing these teenagers on a weekly base, we could get in-depth insights in their play behaviour. Their increased activity and focus on the installation, which was most likely caused because they participated in the study, was beneficial to the exploration, play and use of the installation. We learned that we can transform the inevitable disruption of evaluating in public into a positive force, that can also improve the experience for the users. This is a topic that requires further study and discussion, in order to understand how this can be generalised to other design research projects.