Interactive photo cabinet where funny pictures can be taken if players find the secret code.
Design study during PlayFit project by Rob Tieben. 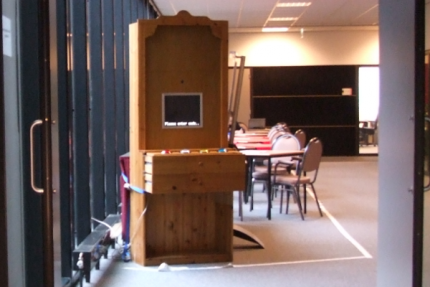 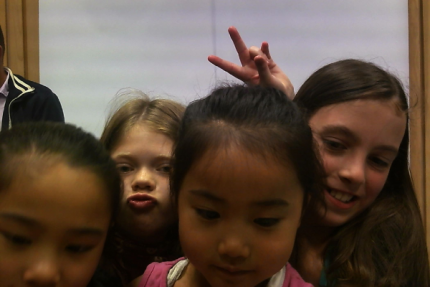 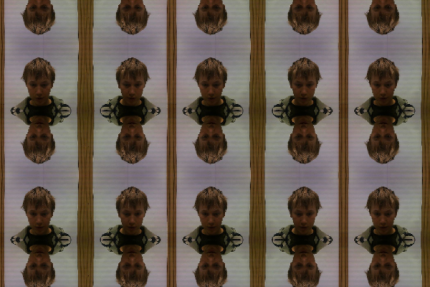 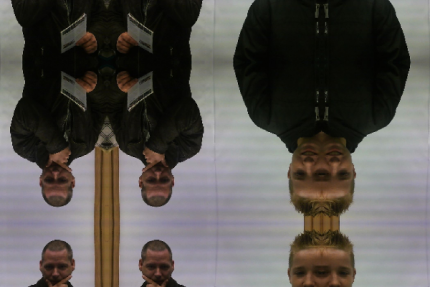 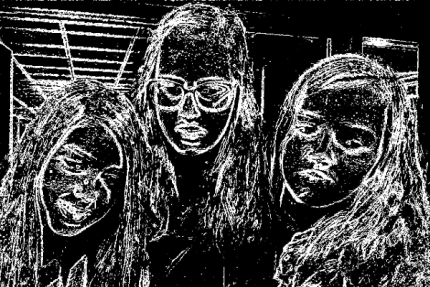 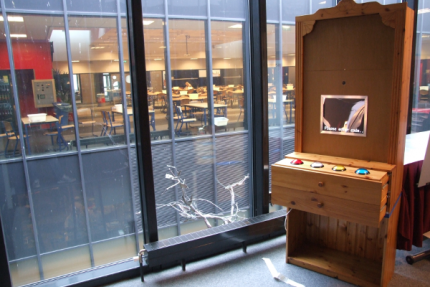 The Photo Vault is an interactive installation that consists of a wooden cabinet, a display, a camera, and four big buttons. In its initial state, the installation asks for an access code; when a button is pressed, the users see themselves through the camera, altered by a video effect. When a code has been entered, i.e. all four buttons have been pressed, then the code is checked, and feedback is given through mastermind-like clues. When users manage to enter the correct code, the installation counts down, and a picture of the users is taken.

All pictures that were taken on the present day were displayed on an external display somewhere else in the school. The code and the video effect stayed the same for one day, and changed each day.

The Photo Vault was installed and evaluated at a high school during one full week. The cabinet was placed in a main corridor; the external display in another corridor. No introduction or explanation was given, neither at the start nor during the week.
During the five days, 1569 (not unique) players played with the Photo Vault, making 2365 photos together. Both individuals and groups interacted with the installation.

On day 1 most students just explored the interaction opportunities of the installation (“what does this thing do?”); on day 2, many students wanted to try it themselves and make a photo, resulting in the highest number of players. On the remaining three days, the absolute number of players slowly declined, but the number of photos taken kept increasing; players tried different poses and compositions, in order to take cool and fun pictures.

On all days except the first, students came to the cabinet in the morning, to see what the new effect was, and to comment on this. A few users then tried to find the code; once discovered, the correct code for that day rapidly spread through the school. Subsequent users either already knew the code, or they would ask and be told by other students in the vicinity of the cabinet.

During the week, it seemed that there were many returning players; although we did not track individual players, we did observe that over 90\% of the players on Wednesday to Friday did already know `how to play’ with the installation, indicating a previous play experience or at least knowledge from hearsay or observation.

Playing style gradually changed during the week: the first days, users were playing with the effect, and posing for different pictures. The last days, groups of students tried to create `special’ photos, such as jumping in the air when the photo was taken, dancing and moving to create a blurry picture, climbing on top of each other, etc.

Pepijn and Mark walk through their school. As they turn the corner, they notice an odd-looking cabinet, with four blinking big buttons. Surprised, they walk to the cabinet and press a button – and realise that they see themselves on a big display, in a kaleidoscope way. Laughing, they punch some buttons, and move around to create funny effects.

Linda joins them, and explains that they have to find a secret code before they can actually make photos. After five minutes of playing, Pepijn discovers the code: red-blue-green-yellow. Together with Mark en Linda, they create a series of hilarious pictures.

Our goal in designing the Photo Vault was to elicit recurrent curiosity: we wanted to motivate playful explorative behaviour on a daily base in a school hall. In line with our free play vision, these playful activities had to be driven by the players themselves: their own actions had to motivate themselves and their peers to start, continue and return playing.For this, we created an installation from an old cabinet, a display and four big casino buttons. We developed a simple game in Max/MSP where users had to crack a secret code, in order to take a picture of themselves. Photo Vault made it enjoyable to pose and observe in ridiculous ways, drawing the attention and interaction of teenagers. By changing the video effect and secret code on a daily base, we managed to redraw the attention of teenagers on subsequent days. Once they started playing, their peers joined in, starting a new chain of interaction.The combination and freedom of self-expression, social interaction, personalisation and exploration allowed us to elicit this playful behaviour from various types of players.

Our main interest for the evaluation of the Photo Vault was how the behaviour would change in the vicinity of the installation: would we be able to create a playful, active environment full of social interactions? For this, we used a combination of methods: we setup an observation area in the school from which we could observe both the Photo Vault and the main school hall. The Photo Vault itself recorded from its camera, providing us with a game-point perspective. Caretakers and interviewers also shared their experiences with us, reflecting on the ‘buzz’ in the school about the installation.The installation was the main topic of discussion and activity in the school during the week: students swarmed around it in the break, they discussed it in the classroom, and were talking about it while walking to and from school. The positive side was that this ‘new object’ clearly elicited curiosity and interest. Simultaneously however, the fact that new ‘objects’ stood out so strongly in the school meant that our observer’s presence was immediately known as well. Students approached us to ask questions; teachers discussed it in the classroom because there were so many questions; etc. This conscious awareness about changes in ‘their’ school influenced the ‘normal’ behaviour strongly: our installation, and our presence, disrupted the status-quo. This proved to be a returning challenge when evaluating with teenagers.