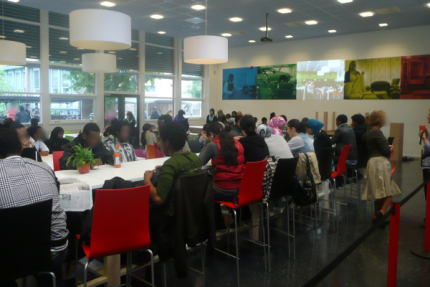 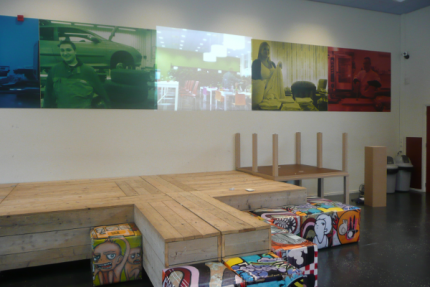 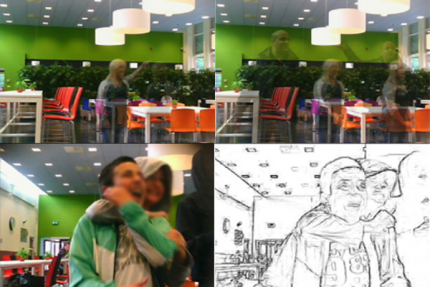 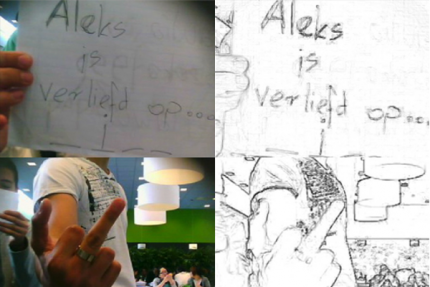 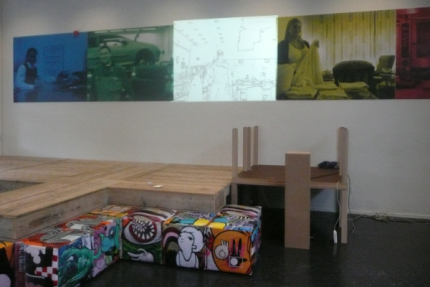 Magic Mirror is an interactive video projection that alters a mirror image of the school hall with various funny video effects. Users in the hall see themselves at the large projection, in for example a comic-like way or with a transparent ghost delay. The video effects changed throughout the day.

Magic Mirror was evaluated during a full day in the main hall of a high school (students in hall observing the installation: 250, actual users who interacted with the installation within 3m of the camera: 46).
Students explored and played with their video image: they would wave, walk to the mirror, and watch their appearance change. They interacted together and alone, all the time laughing and commenting on each other.
In addition, they used the installation to broadcast written text and images to their peers, writing or drawing on a piece of paper and holding this in front of the camera. This started innocently with the youngest students, with notes like `it’s lunch break!’ and hearts with names. When older teens joined, this evolved into sexual drawings and comments – to great hilarity of the students, but less from the teachers.

Linda, Pelin and Mark enter the main school hall during their lunch break.
They see a comic-like video stream of the hall, projected on the wall. When walking closer to the projection, they recognise themselves in comic-style, and start waving and jumping, playing with their self-image. They play for a while, and discover a small camera hidden in the wall; Mark makes a crazy face in front of the camera, broadcasting it to all his peers via the large screen. On subsequent breaks, the effect in the video stream changes, varying from fun-house mirror effects to video delays.

Our goal when designing the Magic Mirror was to explore if we could elicit playful behaviour in a subtle way by literally mirroring students in their daily environment. This way, we could use the users’ actions and physical appearance as input and output to elicit playful interaction.We designed a digital mirror that allowed us to alter video feeds with a range of effects, by using Max MSP software connected to a camera pillar. This prototype could easily be installed and evaluated in different environments, such as a school hall or at public events. The challenge was to create a digital effect that elicited curiosity and active play, while encouraging the player to play in their own creative way. The balance between walk-up-and-use and richness-in-play-possibilities. proved to be a tedious line.

Our main goal for the evaluation of the Magic Mirror was to see how this installation would change the overall behaviour and interaction in the school hall. Could we invite all students to play or to at least watch and discuss this installation?The results were amazing: the freedom in possibilities resulted in a multitude of emergent play activities. Students started dancing, broadcasting and creating rules, while the rest of the students watched from a safe distance. In quiet moments, more timid students approached the mirror, to explore the possibilities themselves. This freedom also resulted in unwanted behaviour, such as obscene gestures and griefing. All by all, the evaluation showed a richness in behaviour – but this richness also made it very difficult if not impossible to capture or measure specific user actions. This continued to be an interesting challenge throughout all evaluations in this design research project.